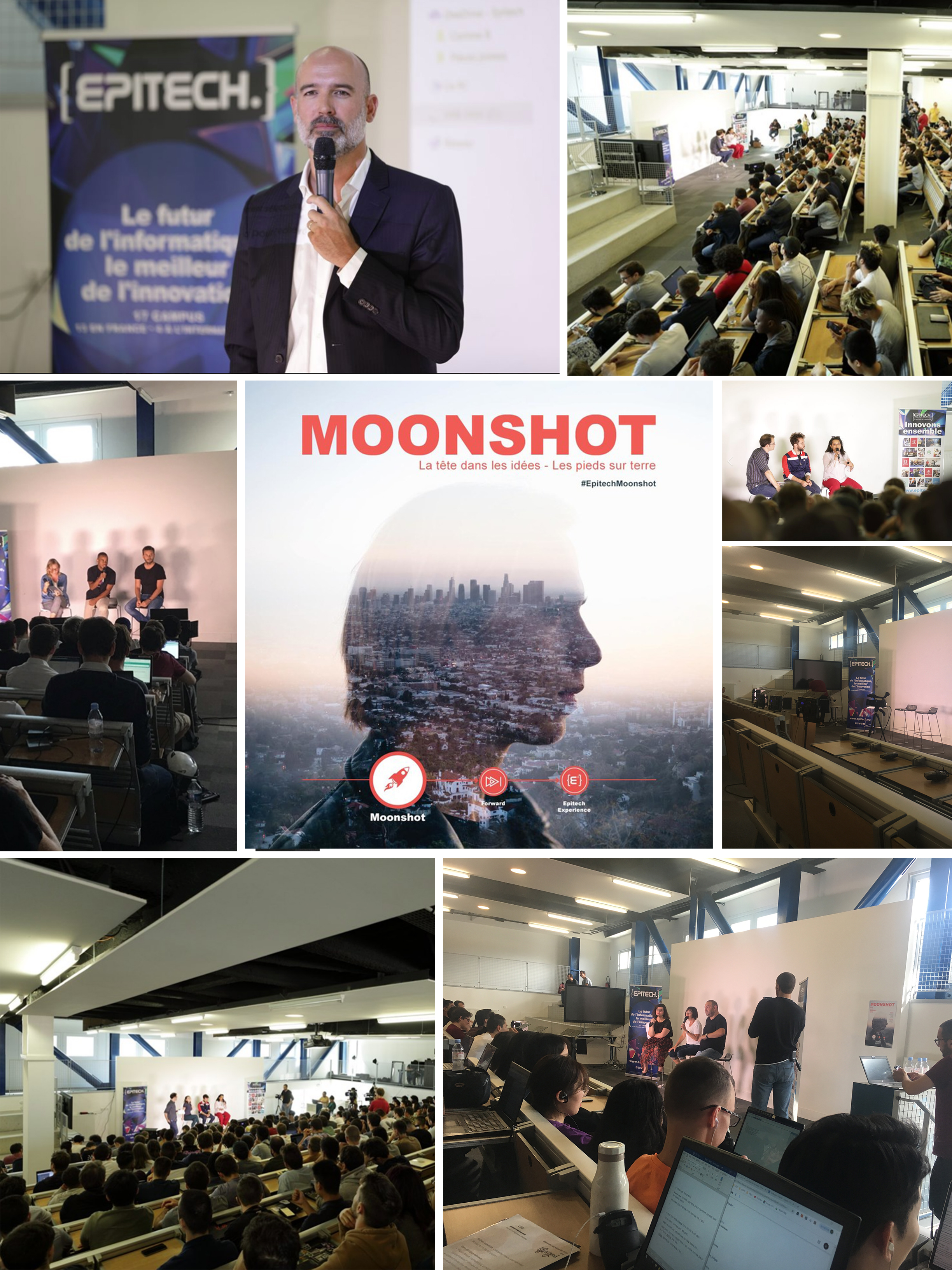 EPITECH MOONSHOT: the cycle of innovation for 3rd year students

Moonshot is aimed at 3rd year Epitech students in 13 French campuses and 4 international campuses. It focuses on four main themes.
From 3 to 13 September 2019, two weeks dedicated to sharing ideas led to the creation of several concrete projects. The “Epitech Innovative Projects” will be developed by the future engineers during their last few years at Epitech. This year, thinking focused on living together (#TOGETHER), climate change (#CLIMATE), the evolution of biotechnologies (#LIFE) and the work environment (#WORK).

Each day began with a video outlining the issues involved in a theme. The introduction was followed by a talk from specialists in the area, examining and debating the given subject. Students then asked questions, helping them develop their ideas and giving everyone, wherever they might be in the Epitech network, the same amount of information.

Heads full of ideas – Feet on the ground

The 1st Theme {#TOGETHER} “2050: what will an inclusive France (really) be like?” with Salwa Toko, President of the French Digital Council, Samuel Chabré, the director of Hyperliens, a web-series loooking at the rural web, and Claire Duizabo, head of communication at the Réseau Entourage and founder of LinkedOut.

Theme 2 {#CLIMATE} focused on the following theme: “Hacking global warming: a user’s guide”. The debate was chaired by Florie Debailleux from Usbek & Rica, alongside Julien Vidal, founder of the website “Ça commence par moi”, Gaël Musquet, hacktivist and founder of the association HAND, and Zeynep Kahraman-Clause, project director at The Shift Project.

Theme 3 {#LIFE} featured a debate on “Living better, longer and in good health: the 4.0 promise or digital utopia” with Florence Pinaud, journalist and author of “Who are the Transhumanists?”, Guillaume Galiay, deputy director at Lab Santé Ile de France – Handicap Mobilité France, and Antoine Bertrand (Class of 2018), a former Epitech #Paris student and co-founder of Pheal.

Lastly, theme 4 {#WORK}, with the final debate in week 1: “Can you ‘programme’ happiness in a company?” with Pauline Rochart, sociology consultant for organisations and HR, Clément Alteresco, founder & CEO of Morning Coworking, and Arnaud Frey, president of Extia.

Atenao covered the event in its entirety, with one conference a day on the themes of living together (Together)/biotechnologies (Life)/climate change (Climate )/the work environment (Work) and two hours of workshops a day on themes linked to developing the projects.

Since there were no cabins, the interpreters used “whispering equipment” or a “tour guide” system. All the conferences were available in English and French. True to its tried-and-tested methods for managing an interpretation project, Atenao provided high-quality simultaneous translations throughout the debates, with themes ranging from climate to biotechnology via the world of work.